10 OBJECTIONS TO THE DOCTRINE OF PARTICULAR REDEMPTION ANSWERED

I came across these objections a while ago. To be honest, they are easily answered. Feed back (as in any article) always appreciated.

If Christ Did Not Die for All Men, Then...

# FIRST OBJECTION: There never was a possibility that all could be saved and hope was limited only to some:

MY ANSWER TO FIRST OBJECTION:  Assuming here that "all" means "all without exception" (for the word carries two meanings in the Bible) it is true to say that "There was never a possibility that all could be saved..." This is because the Bible never teaches that there is a possibility that all without exception could be saved. The non Calvinist objector here does not see his way to providing any Scriptural proof and this is largely because there is none to provide.  This fact is seen at once from the Old Testament where the saving grace of God was largely limited to those of the Jewish community. "You only have I known of all the families of the earth: therefore I will punish you for all your iniquities." (Amos 3:2) For thousands of years, whole communities in the Gentile nations lived and died in their sins without a missionary and therefore without the possibility that they could be saved, unless God chose to send them a man of His choice to preach the gospel to them. Even today, there still places on this earth totally void of a gospel witness  - unreached tribes in the deepest jungles who have never yet heard the good news.

The second part of the objection is that "...hope was limited only to some" but even the objector himself (as Evangelical) limits the hope of being saved to those who are prepared to actually come and receive Christ as their Saviour. Otherwise, the sinner will remain "without Christ and ... having no hope" (Ephesians 2:12) Hope in the Bible has always been limited to the some.  This is exactly what the Calvinist in his broader description as an Evangelical maintains - no hope outside of Jesus Christ.

MY ANSWER TO SECOND OBJECTION: Any man who takes it upon himself to reject the gospel cannot avoid damnation. This alone is the where any damnation lies  - in the sinner's self determination to love and cling to his sin. They will not come to Him that they might have life (John 5:40) and therefore they bring damnation upon their own heads, being the author of their own destruction.

# THIRD OBJECTION: We must feel the insincerity of inviting all to be saved:

MY ANSWER TO THIRD OBJECTION: There is no insincerity at all  in inviting all to be saved, something which those who believe in Particular Redemption are wont to do. While we limit the intention of the atonement to what it will be finally seen to deliver i.e. the salvation of the elect , yet we do not limit in any way the intrinsic worth or merit of this atonement. We are happy therefore to run with the maxim that "Christ suffered sufficiently for the whole world, but efficiently only for the elect." saying with John Calvin: "This solution has commonly prevailed in the schools...I allow that what has been said is true..." It was this truth of the infinite worth of the atonement that enabled Spurgeon to say: "I know there are some who think it necessary to their system of theology to limit the merit of the blood of Jesus: if my theological system needed such limitation, I would cast it to the winds. I cannot, I dare not, allow the thought to find lodging in my mind, it seems so near akin to blasphemy." (Autobiography of  Spurgeon) and yet have him also declare: "I may be called Antinomian or Calvinist for preaching a limited atonement; but I had rather believe a limited atonement that is efficacious for all men for whom it was intended, than an universal atonement that is not efficacious for anybody, except the will of man be joined with it. "(4:121) The strength of the free-for-all invitation lies, not in the intention, but in the merit or worth and so the Calvinist can go on evangelising bidding men to look and live and rebuking and warning those who refuse to do so.

# FOURTH OBJECTION: Unbelief is no longer a sin, especially for those who have no cross to believe on.

MY ANSWER TO FOURTH OBJECTION: The sinner is being asked to believe on the Lord Jesus Christ (Acts 16:30-31) and the invitation that He extends to sinners. No man is being asked to believe if he is elect, but  he is being simply asked to take the sinner's place and to apply for pardon in accordance with the gospel promise which is for every creature. As McCheyne put it well so long ago: "The question is not, 'Am I elect?' but rather, 'Am I one of the human race?'" (Sermon on Proverbs 8:4) A sinner may read the gospel invitation, especially as it is addressed to the "whosoever" (Romans 10:13) and conclude that such includes him in its scope. This is a wide enough matter and so leaves the sinner without any justifiable feeling of hopelessness.

# FIFTH OBJECTION: It would be a sin for those for whom Christ did not die to believe on Him, because they would be believing a lie, a false hope:

MY ANSWER TO FIFTH OBJECTION: If the gospel invitation was limited to the elect, then these words would be pertinent words, but the free offer of the gospel (which is to be extended to every last sinner) renders the objection null and void.

# SIXTH OBJECTION: Those who preach the gospel to every creature SIN because they preach good tidings to all men when in fact there aren't good tidings for all men in the cross:

MY ANSWER TO SIXTH OBJECTION: This is an unjust charge. It is unjust because the gospel invitation is based on two things [i] The worth of the merit of Christ's work which is infinite and [ii] the commanded width of the invitation which is to the whosoever, as elucidated in the previous answer. This being so, it is no sin to preach the gospel to every creature as commanded in Mark 16:15. No living man has any right to conclude that Christ did not die for Him. If he does so, it will not be in a Calvinistic induced despair, but simply because he views it as another excuse to hold on to his sins.

# SEVENTH OBJECTION: God would be insincere in commanding all men to repent, seeing if they did repent, they'd have no provision in the cross:

MY ANSWER TO SEVENTH OBJECTION: This objection is erroneous again on two accounts. [i] It assumes that repentance is required only to facilitate the reception of Christ. Even if there was no salvation for anyone, we would still be required to repent and forsake our rebellion against God. We would still be required to believe everything which God said. [ii] It assumes that you have men repenting but coming to the Cross and God turning them away. There is no record of anyone coming in repentance and faith to the Cross and being turned away and Calvinists do not believe nor teach that such happens. This is the figment of an over zealous imagination on the part of those who oppose the Doctrines of Grace (or to be more precise) what they perceive those same Doctrines to teach.  Both repentance and faith are saving gifts from God and they are given specifically to His elect so that they will come to the Cross and be saved.

# EIGHTH OBJECTION: Why does He say He's not willing that any should perish?

MY ANSWER TO EIGHTH OBJECTION: God's unwillingness that any should perish stems from that part of His character that is benevolent and loving etc., He is not a cruel despot, taking delight in the sufferings of His creatures for the sheer fun of hearing their screams and anguish. Yet He willingly allowed sin to enter into the world and based salvation on the necessary reception of Christ, when He might have easily avoided the first and thus rendered the second unnecessary. It is sufficient for the sinner to read words like 2 Peter 3:9, look at the invitation of the gospel and conclude that there is hope for him if he will but come and believe etc.,

# NINTH OBJECTION: All for whom He did not die come into the world with the irrevocable sentence of damnation upon them:

MY ANSWER TO NINTH OBJECTION: This is just the first objection rehashed. See the answer given there.

# TENTH OBJECTION:  Why should the Devil do anything, seeing God will hand over to him the largest portion of humanity without his lifting a finger?
MY ANSWER TO TENTH OBJECTION: This objection again lays undue emphasis and weight on God handing over the largest portion of humanity (assuming that the largest portion of humanity will be lost) to the Devil. The sinner effectively hands himself over to the Devil by his constant sinning and rejecting of the overtures of grace. The question also presupposes that if the Devil did nothing then all men would run to the Cross and be saved. This ignores the innate wickedness and depravity of the sinner's heart. The Bible makes it clear that [i] all men will not be saved and that [ii] a certain number will be converted through the preaching of the gospel. Even non Calvinists (of the Old School Evangelicalism) believe this. God had a purpose in creating the Devil in the first place - creating him with the full knowledge that he would turn malignant and create havoc in the world. Yet He wisely decided that this should be the course. In a future day, we will fully understand the whys and the wherefores of these things.

* The Debt is paid - Particular Redemption

Similar articles: 12 reasons CH Spurgeon and Particular Redemption (including links to CHS's sermons on the same subject)
Posted by weecalvin1509 at 10:13 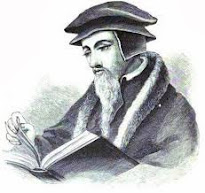